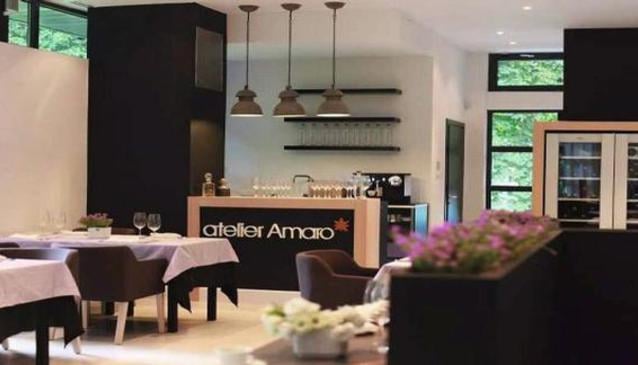 Atelier have realized the new idea for a restaurant serving food using only the best seasonal Polish products and in the restaurant, culinary works of art are created every day. Atelier is a place where nature meets science.

Chef Wojciech Modest Amaro is one of the greatest chefs in Poland, specializing in molecular gastronomy. For many years Wojciech Amaro worked and practiced alongside renowned chefs such as Ferran Adria (Elbulli), Yannick Alleno (Le Meurice) or Rene Redzepi (Noma). In 2008, the International Academy of Gastronomy awarded him the prestigious award of Chef de l'Avenir for his outstanding talent. Amaro is also the author of the bestselling book '21st century Polish cuisine', for which he was awarded the Grand Prix Litterature de la Gastronomique in Paris.

Amaro has made no secret of his hopes to win Warsaw's first Michelin Star. His intimate restaurant, with fewer than a dozen tables, does not have a traditional menu; instead diners plump for either three, five or eight courses. Every few days the menu is changed, so the current set at any one time is essentially unique and vegetarian versions can be ordered upon request. The extensive wine list from around the world is a great addition to the menu. In Amaro's restaurant you can also try the excellent Polish tinctures, meads and liqueurs.

Atelier Amaro is an example of 21st century cuisine, where courses are called 'moments'. To maximize the gastronomic experience, each moment can be enhanced with a selection of speciality vodka.

Atelier will apply for a recommendation from Slow Food Poland, which shows the care taken in choosing the right products and the local patriotism expressed on the plate.

This restaurant has been recognized as a Michelin Rising Star as one of three in Europe, and in April 2011 in London as one of the 50 best restaurants in the world.

All of our providers offer 24/7 support